We help companies automate and streamline their business processes and practices efficiently. This is done with

Intelligent Automation enhances customer and staff satisfaction by eliminating routine work and helping to move focus to customer service. Improved customer service and processes will bring you competitive advantage with the help of Digitalization.

Derobia is Lekab Communication Systems (www.lekab.com) brand for Intelligent Automation solutions and services. We have been providing solutions to hundreds of customers since 1994. Derobia’s (DEvelopment of ROBotics and Intelligent Automation) core competence is to develop business practices together with the customer by utilizing the latest technology. Derobia uses the intelligent automation solution technology provided by Kofax.

Want to know more about our solutions and services! Please contact our attentive personnel.

Fredrik Ramén was lead investor in the acquisition of LEKAB in 2007. He has 20+ years of experience from management positions with companies like Electrolux, StoraEnso and Swedish Match, focusing on Emerging markets. In 1997-2004 he lived in Singapore, heading Electrolux’s East Asia operations. He is the chairman and a major shareholder of Frame Invest AB, a boutique Private Equity company investing in small companies with expansion opportunities in northern Europe.

Therese joined LEKAB in 2006 as Chief Financial Officer, and is responsible for finance and control. Therese has more than 15 years of experience within auditing and financial consulting, and among other positions has been a Senior Advisor at Deloitte, and also held senior positions at Andersen.
Therese holds a Master’s Degree in Business Administration from Stockholm University.

Mattias joined LEKAB in 1997 as the company’s third employee. He has held several leadership positions within support, operations and project management. He has also worked as Solution Architect and Product Manager. In 2013 he was appointed CTO and joined the management team. His educational background is from technical school.

Pekka Ollila joined LEKAB in 1998 as Managing Director for Finnish operations. In 2005 he became Managing Director and CEO for all of LEKAB. His background includes various positions at Verimaton OY, including Managing Director and Head of Sales & Marketing, as well as several positions within development at Telenokia/Nokia and Programmatic Group.
Pekka has a Bachelor of Engineering in Tele and Data Communication from Helsinki Institute of Technology.

Mikko joined LEKAB Finland in 2000. He has worked in several positions from Sales Engineer and Solution Architect to Consultants’ Lead. Before LEKAB he worked as Senior Technical Architect in Outokumpu Group IT. Mikko has an educational background from IT and Service Design. 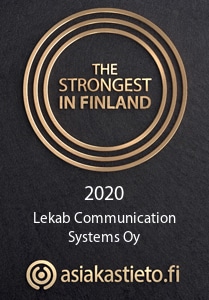